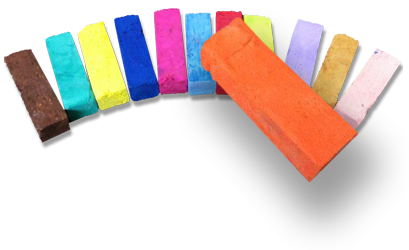 For the sidewalk artist, gospel artists, and many other uses. You can purchase any of our basic chalk colors by the stick or in selected sets. For optimum vibrancy, try our fluorescent chalk. It "pops" on paper or sun-lit concrete! And especially for inside presentations, we have a nice assortment of black light chalk for some incredible special effects.

Plus, we some other essential chalk artist supplies like sanding blocks, blending blocks, Kwik-Wipes, and hand soap. If you need bogus paper, we carry that as well.

Whether you are a full-fledged gospel artist or aspiring to be one, there are basic tools of the trade that you need. One of those items is a good-quality easel with a lighthood if you are going to be doing special effects with your drawings. And of course, if you're creating "hidden images" with black light chalk you'll need black light bulbs and black light safety glasses..

As your audience grows in size, your need for voice amplification will increase dramatically. Here's a great amplifier, speaker, and microphone system that will provide nice-sounding, broadcast volume for your presentations. 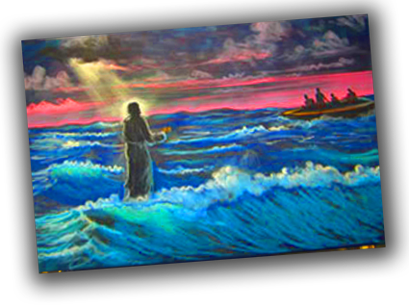 If you are new to chalk drawing, you what to check out the introduction to chalk drawing. It answers the question, who can be a chalk artist. Then you should read the history of chalk art so you can see how this amazing art form has changed and grown over the years.

For the optimum training experience, we offer a live Phase I class where you can get instant feedback, great one-on-one instruction, and meet other experienced and beginning artists. This live class is only scheduled one time a year so if you don't want to wait for a class, you can get the next best thing in the comfort of your own home — the whole Phase I Course on DVD. In either case, you can meet the Phase I Instructor right here.

Once you've mastered the basics, you're ready for advanced training in our Phase II course. Sorry, this course is only available in a classroom setting, once a year. But, it's definitely worth the wait and the investment in time and money! 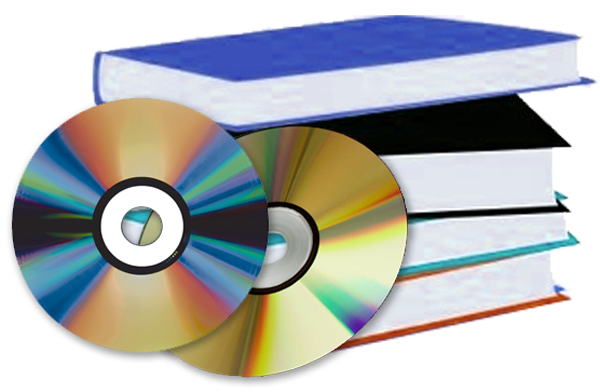 Need some ideas for your own chalk art presentation. We've got a great a book that will get your creative juices flowing. We also have a number of fascinating chalk artist video presentations on DVD that will inspire and give you lots of great chalk drawing tips. And then, as a way to promote your chalk drawing avocation, grab some beautiful note cards featuring some of Matt Bowman's best gospel drawings on the front. 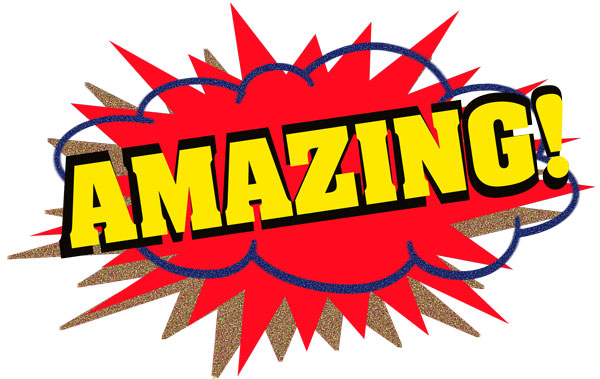 The Ways People Use Our Chalk...

The Amazing story of how we got our chalk

Since 1992, Matthew Bowman has been a chalk artist in several places around the globe, sometimes drawing for crowds as many as 25,000 at a time. In 1995 after a trip to Taiwan, Matt was asked to move to Chicago and work with a non-profit charity ministry and begin a chalk art course for people to learn. During that time, Matt taught and sold chalk to his students and continued to do programs all over the world. As a result the charity ministry he worked for became the largest distributor of lecturers chalk.

In 2000, Matt bought out the chalk inventory from the ministry he had been volunteering for in order to returned home to Michigan. He then launched Eternity Arts and started the eternityarts.com to sell materials to his chalk artists that he had trained.

The chalk inventory started out in the basement at his parent's house, to another garage and some friends, then a semi-trailer, to another garage and finally a building in 2006. In 2005, Dixon Prang sales reps told Matt that there would be a sale on the chalk. This was odd since it had never happened before. Dixon has been making art supplies since 1795 and they were the world's only producer of lecturers chalk for Gospel chalk artists. They had decided to run a sale in order to liquidate their inventory. They were ceasing production on lecturer's chalk altogether. Matt realized immediately that this could be the death of chalk art, as we knew it.

Dixon told Matt that they had forty three hundred cases of chalk to sell out. Matt had sixty-day terms and free shipping with Dixon, so he committed to buy it all. "I had no money" Matt said, but "knew if I had sixty days, I would have to find it somewhere."

Matt also negotiated with Dixon for several hundred thousand dollars to be able to buy the formulas, but they were not interested in selling the recipes. He asked Dixon how much room they would need and how much space would it take up, but the rep did not know. Matt recalls "A week later a 48' semi-truck pulled in to our residence at the time and told me they had a delivery for me. I said how much is there?" The driver said, "Son, this whole truck is yours!"

"It took us about 2 hours to unload and thankfully we had a neighbor with a high low that helped," he recounts.

Matt and his wife Katie had just finished building their house that year, so the chalk was packed in the 3-car garage floor to ceiling 15 feet high all that next winter. They had been saving and planning to live their marriage debt free, and built their house that way.

However when the need for preserving the chalk ministry came, they decided to mortgage our home in order to have the money to buy the chalk. What they did not know at the time was that it would cost well over half a million dollars to get into full production during the span of three years that followed.

When the inventory arrived, they found that they had a very wide range of quantities of each color! "We had 3 pallets of yellow orange and only 8 boxes of Magenta. In other words, we had enough yellow orange to last a hundred years, but less than a year supply of magenta," he remembers.

Another challenge was that while they had this chalk, they had no idea how to make more when it ran out. The recipes and process had been a trade secret for years, and Dixon was not going to sell them. All that winter of 2005-2006 Matt worked with chemists around the country getting ideas and tips. Everyone gave them a piece here and there to a larger puzzle, but no one had all the pieces. Some ideas for the process proved to be a huge waste of money and failed immediately.

Matt says, "We went to work on the white right away and with chemists and labs working closely with us it took over 100 tries to get it right; and even then, still perfected it over the next two years. Colored chalk was not as easy as white like we thought it would be. Since lecturer's chalk is so soft, extremely pigmented, rich and bold, no two recipes are alike. The whole process and chemistry changes from batch to batch. The red chalk for example took Matt four years to discover and he is still working on it. The black took two years."

The following spring, Matt got a call from the Tiger Woods foundation requesting a quote on some chalk and custom packaging. Matt gave the quote and was told it was too high. He spent the next few weeks negotiating the deal with the foundation. They could get it a bit cheaper from China, but not as fast as Matt could make it here. The foundation was looking for the chalk to be packaged and put in an outdoor activity set for children to use out doors. The event would be at all 4011 Target stores in America for the "Kids Night Out" event.

The Purchasing agent for the Tiger Woods event told Matt that they would have to get the chalk in 8 weeks and that they needed a hundred thousand packages of chalk. At this time the only color that Matt new how to make was white. The foundation told Matt that they did not care what colors were in the set as long as there was a white in each one! What are the chances of any group buying chalk and not caring what colors they got? "Since we were just getting started in this chalk making we had very little equipment. The packager, forklift, and tons of tools had to be purchased in time and be operational," remembers. As soon as Matt signed the contract with 8 weeks to deliver the chalk, the foundation agreed to pay for it up front!

Matt signed a contract and went to work with a friend around the clock for 8 weeks to make the deadline. "We had to update all our equipment and in some cases buy it. The pressure was on and we had only eight weeks. We spent the first 4 weeks making the chalk and when we got done we realized the chalk was not drying. We then had to go to work on a new way to dry it and fast! We had 4 weeks left to dry and package it. The Lord made a way and we finished with 2 days to spare!"

"That is how the Lord got us started in making the chalk with no equipment to start and no money," he says.

In the days that followed as they would start to run out of a color, they would get to work on it full time until we got it. "And as far as I know, never back-ordered anyone's chalk." God gave the formulas and process to Matt through prayer, those God brought into his path as well as the support and understanding of his dear wife Katie who had to do without him much of the time during the thousands of hours of work, experiments and study.

Every stick is still handmade. "This type of chalk would be next to impossible to automate," says Matt. "It is a process that takes a lot of time and an incredible amount of mess. If it were not for the Gospel ministry and the winning of the lost, I would not have wasted my time in this endeavor. It is also why I believe God saw fit to preserve it in this way."

Back in the 70s when black light chalk was no longer being made, Ding Teuling stepped up to the plate and bought it and made it for himself and others. That was part of his calling from God. He did that so we could be here doing it today. If he had not done it, most if not all of us would not be here now doing it. Matt says his part is the preservation of chalk art was his part, in his day, just like Ding's was in the 70s. Since taking on this huge chalk making process and great expense, it has been obvious that the huge set up, ingredients that are only available in large quantities, sales only to a minority called Gospel chalk artists, that this is the reason that Dixon got rid of it in the first place.

God has opened other uses and markets for Eternity Chalk such as the recent popularity of the 3D street painters as well as many industrial uses. It is these growing markets that God is using to help support our true calling, the Gospel chalk artists.

It is Matt's prayer that the Chalk artist will take the tools God has given and preserved and reach to world as he is trying to do with Eternity Arts. You can visit Matt's personal site at ChalkEvangelist.com